The SNET in Cuba

So in Cuba there were these local, ground-up, and cheap (in some cases free) networks collectively known as SNET. These networks were intranets after all (street networks), and had no contact with the outside internet. Some time last year, Cuba's Ministry of Communications passed resolutions "limiting wireless transmission power and outdoor cables", essentially ruling SNET illegal. But in reality, this infrastructure is simply being appropriated by the government to improve access and extend it throughout the country. These networks started small. At first, groups of gamers would join together in LAN parties until moving all the bulky CRTs and computers they had to lug around became too much to bear. So one group decided to wire themselves up their own, longer-distance LAN to play from home. As time went on more did the same, and over time connected to each other, forming larger and larger networks. To keep up with demand they formed "pillars". These are buildings that hold long range, directional Wi-Fi antennas that sent and received data from local nodes, and other pillars. These nodes then connect up to 200 nearby users, through wired ethernet or wireless (typically the former). And from there you can see the issues they would have to deal with.

Firstly they lacked any kind of formal centralisation. While these pillars typically had the same sets of rules, there would be no one place for, say, DNS services or certificate authority. This made anything that required an identity hard to pull off properly. Any lost passwords and your account was unrecoverable. And forget about SSL encryption. Even more importantly coverage was slim, and bandwidth low, as all equipment used was very cheap. At the time this news came out, by accessing these mostly separate networks you were generally limited to linking with people within your city.

This chart, while outdated, demonstrates the unfortunate lack of reach of this home-grown network despite its impressive amount of users (believed to reach 40,000 in the capital). Now with the state's Youth Computer Club taking the reigns (in co-operation with existing pillar owners), their 633(!) locations will be broadcasting signals throughout the country to bring the level of access to new heights.

These street networks are in the process of being cannibalised into TINORED, the network established by the state's Youth Computer Clubs. In Havana now there are 2,600 connected users, with 13 other provinces attempting to do the same in limited testing.

The Youth Computer and Electronic Clubs, presided over by the Ministry of Communications, strengthen their infrastructure to reach the highest amount of locations possible; in the same way, they employ the teams of which form the private networks [SNET], thanks to their disposition for collaboration for the enjoyment of the "Cuban computer family's" services.

The director of computerisation of the YCC, José Carlos Cruz Sandoval, says they "want to reach the highest amount of coverage to allow for the evacuation of traffic at a network level and avoid interference with [their] establishments". I'm honestly unsure what they mean with the second half, but the first shows clear dedication to expand access and connectivity throughout the country. 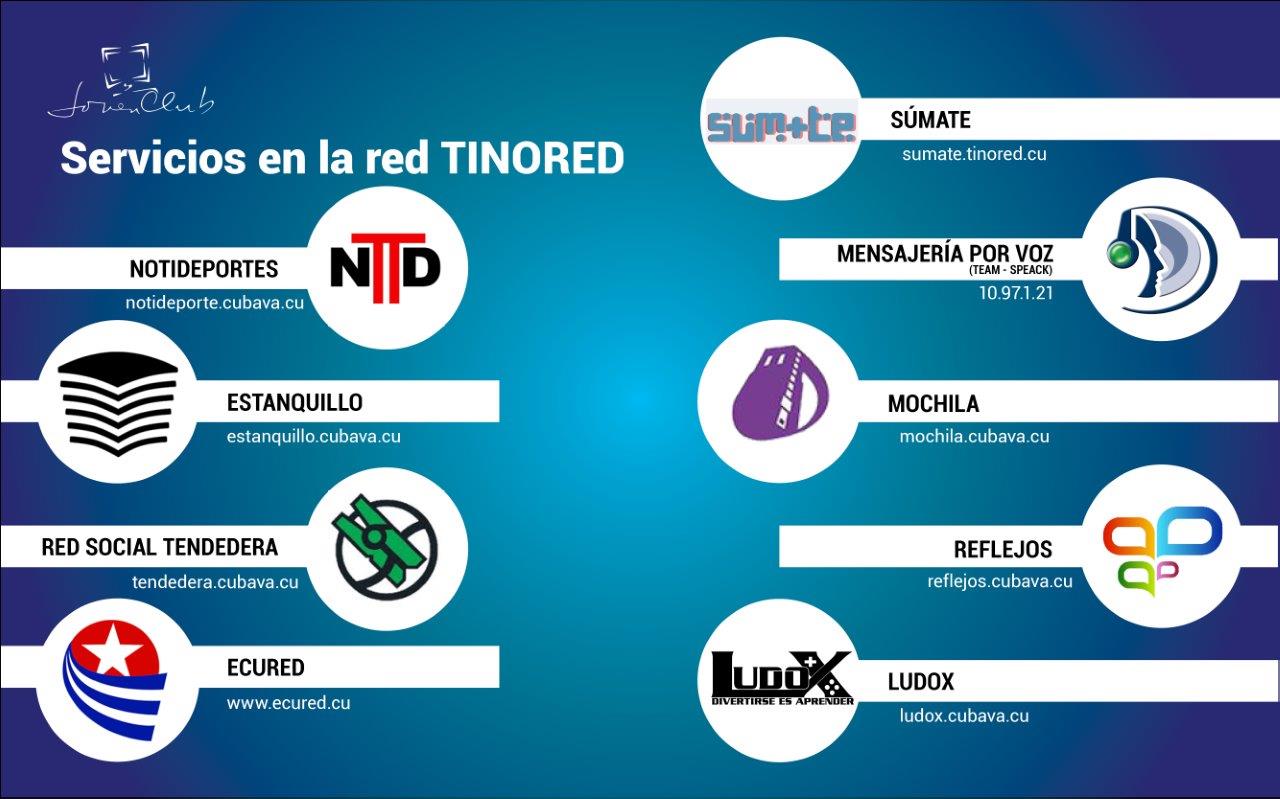 List of services hosted within the TINORED network (source)

Javier Ferreira García, administrator of one of these street networks in La Lima, clarified connectivity has been excellent since joining the Youth Computer Club network, and that "what affects us now is potency [reach?], but in the future this should improve".

"At the moment the experience has been really good; with the institution communication has been fluid and we collaborate constantly, they clear up our doubts and we support each other mutually with gear and infrastructure."

These members of Havana's private networks, in spite of initial misunderstandings, handed over 250 games and services developed by them to the YCC, and from the beginning its goal was to contract these people as workers or collaborators in the process, and in doing so recognise their talent.

This coupled with increased access to ETECSA from home shows Cuba's inspiring resilience and its dedication to bringing full connectivity to its country in the face of sanctions and blockades.